Ed Filhart raised 12 kids with his wife of 46 years, Mary, on their farm in Shepherd. Now they have 24 grandchildren who come to visit frequently. Most days Ed spends his time maintaining the farm and training his Belgian horses to pull wagons and carts for yard work.

Ed plays around with his grandson putting his old hat on his grandson's small head, at Stan's cider mill in Rosebush, MI. The large family meet up at Stan's to take the apples from the old apple tree behind the Filhart's house and make cider for the whole family to share. 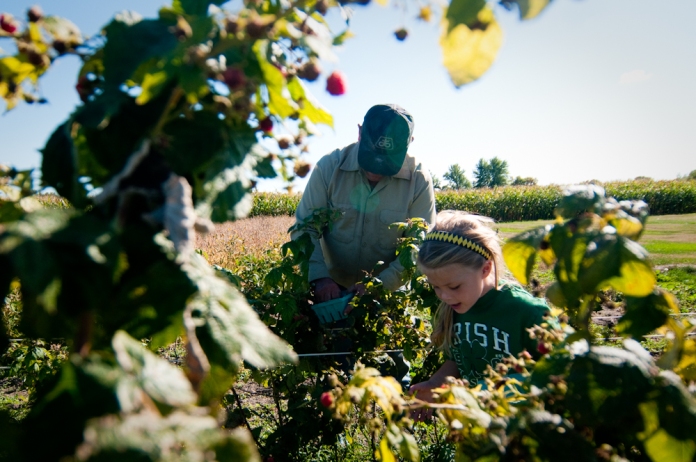 Emma, 7, would rather eat the raspberries straight off the plant than collect them in her carton for later. "If you keep eating them all, you're going to get a stomach ache again'" warned Ed.

The grandchildren competed to see who could fill their carton of raspberries the fastest. Emma, 7, decided she'd rather eat them right off the plant then collect them for later.

The Filhart's grandchildren play in the yard that their parents played in when they were growing up on the farm. The grandchildren planted corn in their sandbox and climb the old apple tree looking for the best apples to munch on 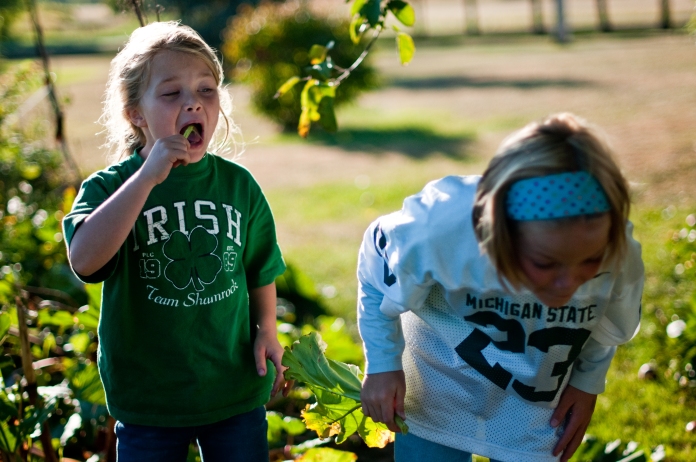 Emma, 7, and her older sister Molly munch on rhubarb despite the foul taste. Emma follows her sisters lead in chewing on the plant. Emma, a Notre Dame fan, and Molly, a Michigan State University football fan, were competing all day as their respective teams played on against each other on TV. The girls would run back inside to check the score in between playing with their cousins.

Ed and Mary Filhart play tri-dominos on a Tuesday night at their kitchen table. "And then it gets quiet again," said Ed after their children and grandchildren say their goodbyes. The family is always coming together at the Filhart farm. The house seems to expand and contract with the arrival and departure of the grandchildren. Ed and Mary, who have been married for 54 years. spend their evenings together playing card games and winding down from the day.

The Filhart’s: A Lot of Love to Give

On a back country road a white house sits adjacent to a green pasture where horses graze. A swing set, sandbox, small garden and an old apple tree lay behind the house. In the early morning the farm is quiet except for the 2 dogs, Louie and Willie, who loyally follow their master around the yard. In the late afternoon the yard comes to life.

Ed and Mary Filhart have raised twelve children of their own in this home, and now twenty-four grandchildren. Most of their kids have stayed near the Shepherd, MI farm to be close to their siblings, nieces and nephews. Members of this large family are always coming by the farm, bringing the grandchildren together to play in the yard that they grew up in.

In addition to taking care of the farm, Ed raises and trains colts and horses.  Currently he has two colts and four Belgian horses, which he broke to ride in teams and pull wagons for yard work. “The horses used to do everything on the farm,” said Ed, “now we use tractors.” Ed’s sons and son-in-laws come to help him with the heavy labor of farm work.

When it comes to the fun tasks around the farm, the whole family lends a hand- even 3-year-old grandson, Maverick. On a warm sunny September afternoon, Ed spends time with his daughters and grandchildren picking raspberries from the patch behind the house. The grandchildren race to see who will fill up their carton first. Emma, 7, would rather eat the raspberries straight off the plant than fill up her carton. Her older sister Molly, a competitive sport, filled her’s up first. Toads, bumble bees and crickets distract the kids, and soon they’re off to playing in the sandbox.

When the family leaves to go back to their respectful homes, Ed and Mary are left in their front yard waving goodbye as the kids scream farewells from the car windows. “And then it gets quiet again,” said Ed. Although only Ed and Mary reside here, it is home to the whole family, and a home that has a lot of love to give.

One thought on “The Filhart’s: a lot of love to give (color)”